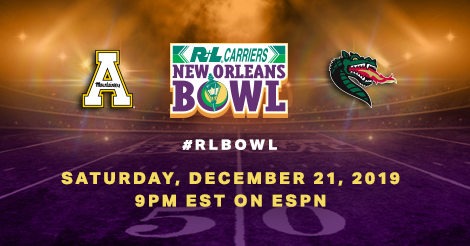 Here’s what you need to know about both teams.

App State has found great success under head coach Eli Drinkwitz who took over the program a year ago. The Mountaineers are ranked No. 20 in the final College Football Playoff rankings and are coming off their fourth straight Sun Belt Conference Championship. Drinkwitz has reportedly accepted a new head coaching job at the University of Missouri, courtesy of this success. It’s unknown if Drinkwitz will be at the helm of this game and guide the 12-1 Mountaineers to their second straight R+L Carriers New Orleans Bowl Championship. Darrynton Evans leads as the team’s star running back, fresh off his three touchdown performance against Louisiana in the Sun Belt Conference Championship.

R+L Carriers is proud to present the 2019 R+L Carriers New Orleans Bowl between Appalachian State University and UAB – The University of Alabama at Birmingham. Be part of the action by following #RLBowl and joining us in the Fan Zone at rlbowl.com! 🏈⚜️🎭

UAB is representing the Conference USA with a 9-4 overall record. Coach Bill Clark has led the Blazers since 2014, however, budget cuts in the athletic department forced a 2-year shutdown on the program. The school reinstated its football program in 2017 and has made it to bowl games every year since, finishing 10-3 last season and defeating Northern Illinois in the Boca Raton Bowl. This year, UAB lost to Florida Atlantic 49-6 in the Conference USA Championship–but don’t let the score fool you, three of the team’s running backs put points on the board. Spencer Brown, Jermaine Brown Jr., and Lucious Stanley have 5, 2, and 7 touchdowns this year, respectively.

This game is shaping up to be a long haul on the ground!

Join us here in the R+L Carriers Fan Zone to follow Appalachian State and UAB on and off the field leading up to the bowl game. You can watch the game December 21 at 9 PM EST on ESPN or listen in on ESPN Radio. Want to join in on the fun? Bowl Week is full of activities building the ultimate R+L Carriers New Orleans Bowl experience. Tickets start at $30 and activities include the Friday Night Concert featuring the B-52’s and the Bowl Luncheon featuring Super Bowl XLIII Champion and ESPN Analyst Ryan Clark.