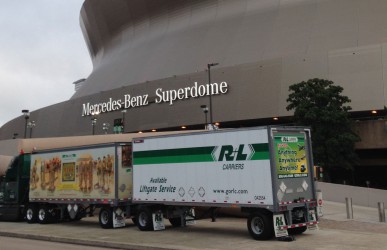 The date has been set. On Saturday, December 19th, 2015 (CST), the 15th Annual New Orleans Bowl will be played in the Mercedes-Benz Superdome. Officials from the R+L Carriers New Orleans Bowl and the Greater New Orleans Sports Foundation made the official announcement June 2nd. The game, which will be televised on ESPN and ESPN Radio, will feature a matchup between the Sun Belt Conference and Conference USA.

History of the R+L Bowl

Since the inaugural year of 2001, the Sun Belt Conference and the R+L Bowl have grown together. The bowl game is managed by the Greater New Orleans Sports Foundation, which was established in 1988. Their mission is to attract, manage and promote sporting events to the Greater New Orleans area for the purposes of economic impact. Since the first game in 2001, the New Orleans Bowl has made an economic impact of $25 million on the community. In that first game, Colorado State defeated North Texas 45 – 20. In recent history, the UL Ragin’ Cajuns have made four straight R+L Bowl appearances, becoming the only team in NCAA history to win the same bowl game 4 years in a row.

About the Two Conferences

Road to the R+L Bowl

In a press release by the Sun Belt Conference, ESPN announced the complete coverage for the first three weeks of the 2015 college football season. The first Sun Belt Conference game televised in week 1 will be on Thursday, 9/3 when Idaho will host Ohio. There are plenty of story lines coming into this season for both conferences. Can the UL Ragin’ Cajuns make it to a 5th straight R+L Bowl? In the Conference USA, Marshall and Western Kentucky are the two teams to beat. Marshall finished the season 13-1. While Western Kentucky finished the season 8-5, they finished last season strong and return 15 starters and their star quarterback. Both conferences will be exciting to watch during the 2015 college football campaign.

We’re looking forward to another exciting journey on the road to the R+L Bowl. Stay tuned to our blog for more updates on the Sun Belt and Conference USA during the 2015 college football season. You can also follow us on social media on Facebook and Twitter.