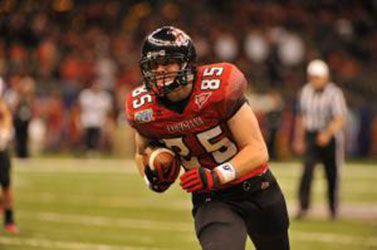 We’re proud to welcome once again the University of Louisiana at Lafayette’s Ragin’ Cajuns to the R+L Carriers’ New Orleans Bowl.  After their win over South Alabama this weekend New Orleans Bowl Officials invited Louisiana’s Ragin’ Cajuns to represent the Sun Belt Conference at the 12th annual game on Dec. 22nd at the Mercedes-Benz Superdome. The game will be broadcast live on ESPN starting at 11 a.m. CST.

This is the second New Orleans Bowl in a row for ULL’s Ragin’ Cajuns. The Cajuns defeated San Diego State University in the last seconds of the 2011 R+L Carriers New Orleans Bowl, making for what turned out to be the 2nd best ranked bowl game of the season. In December 2011, Cajuns quarterback Blaine Gautier threw a record 470 yards and kicker Brett Baer drilled a 50-yard field goal as the Cajuns rallied from behind to defeat San Diego State, 32-30.

42,841 people attended the game that year, making it one of the most attended New Orleans’ Bowl games in history.