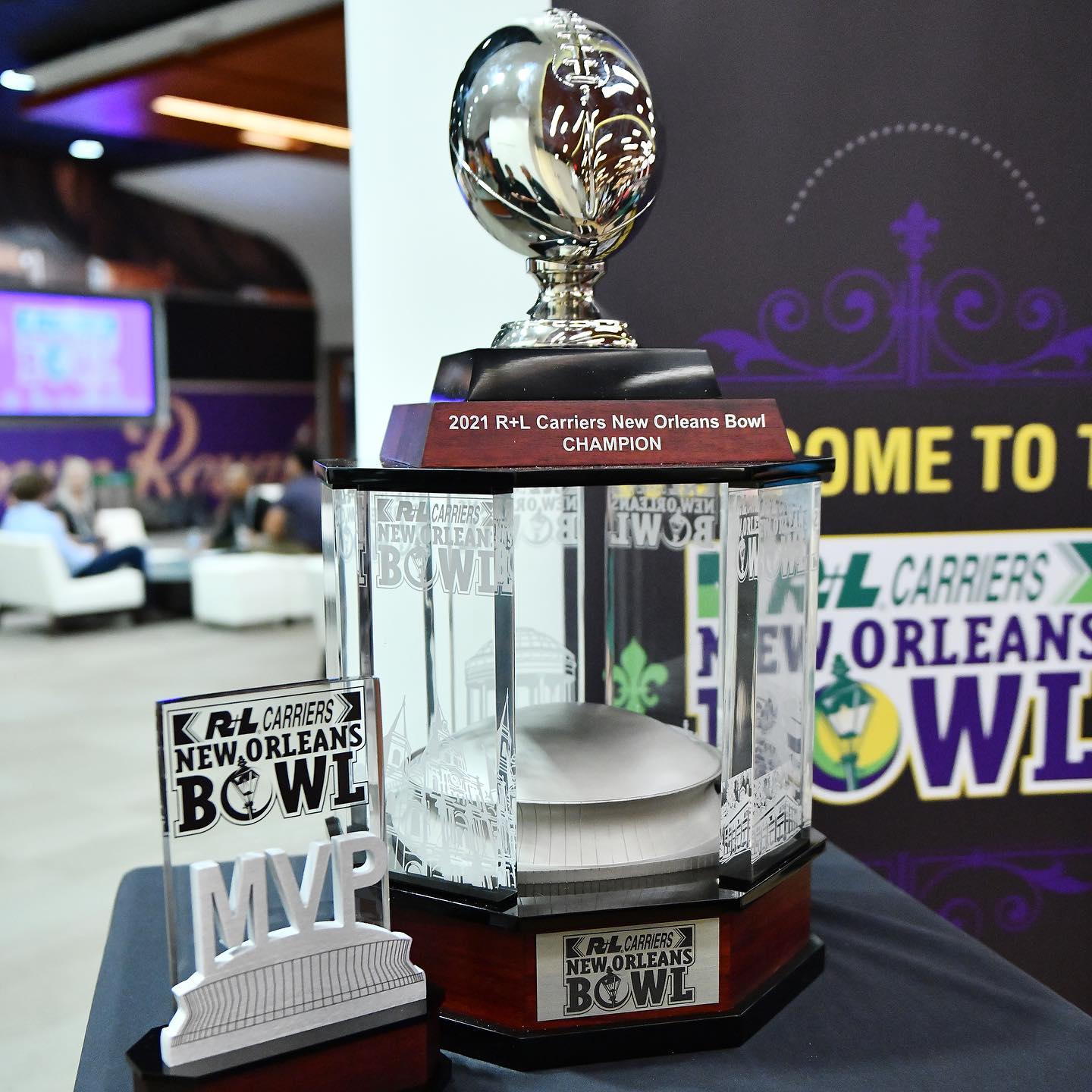 The 2021 champions have emerged from this year’s Battle in the Bayou! Two eager competitors were announced in early December; take a look here to learn more about each team’s prospects leading up to the big game. After a hard fought match, the Ragin’ Cajuns proved victorious over the Thundering Herd, with a score of 36-21. The University of Louisiana Lafayette couldn’t be stopped, earning their fifth victory at the R+L Carriers New Orleans Bowl. Overall, this brings the team to a record six appearances.

In celebration of their success, the Ragin’ Cajuns claimed the bowl trophy, passed around between the team’s players and coaches. This year also marked the 21st edition of the New Orleans Bowl and the 16th year R+L Carriers has served as its title sponsor. Once again, congratulations to the University of Louisiana Lafayette, your 2021 champions!

Earlier this week, both teams arrived to New Orleans, greeted with the fanfare of local bands and representatives from the Greater New Orleans Sports Foundation. Shamrock, one of the city’s iconic neighborhood bars, welcomed the Ragin’ Cajuns on Tuesday, followed by the Thundering Herd a day later. Each team enjoyed some much deserved recreation among the joints multiple pool tables, dart boards, bowling lanes and other attractions.

A Day of Service in the Crescent City

Not long after their arrival to New Orleans, both teams participated in a day of service, assisting those in and around the local community. Moments like these serve as an opportunity for athletes to give back to the individuals and organizations that make New Orleans such a thriving force of civic engagement. No doubt, the Ragin’ Cajuns and Thundering Herd picked up a few extra fans along the way, just days before the city crowned the 2021 champions.

What it is all about. pic.twitter.com/brvvR50wgj

Welcome to players from the Marshall University Fighting Herd in town for the R+L Carriers New Orleans Bowl to one of our build sites! #buildingstrength #buildinghope #neworleansbowl #marshalluniversity pic.twitter.com/1RsXfYjoNI

All Eyes Turn to Media Day

The advent of Media Day brought many smiles and eager voices as both teams sat down for consecutive interviews. Michael Desormeaux, Head Coach for the Ragin’ Cajuns, as well as Charles Huff, Head Coach for the Thundering Herd each gave their take on how their teams were shaping up for the Battle in the Bayou. Additionally, the players got in on the action, speaking about their New Orleans experience and sharing thoughts on the upcoming match.

At games end, the pepper proved too spicy for the herd. With their a victory over Marshall University, the University of Louisiana Lafayette became the 2021 R+L Carriers New Orleans Bowl Champions! Both teams were supported by a legion of fans watching at home and from the seats of Caesars Superdome. Here’s a look at how Game Day started…and ended…with the return of the former bowl champion.

My crew for tonight’s #RLBowl. It’s been a wild ride this week but now it’s time to get to work.#GoHerd pic.twitter.com/1WcUnUPLqz

A post shared by Marshall Univ. College of Ed. (@mu_coepd)

See You Next Year!

R+L Carriers returns in 2022 as the New Orleans Bowl title sponsor for the 17th consecutive year. Furthermore, thank you to everyone who tweeted #RLBowl and #neworleansbowl; your support brings recognition to the hardworking athletes on both teams.

Join us next December for the 2022 R+L Carriers New Orleans Bowl, until then, let the good times bowl!