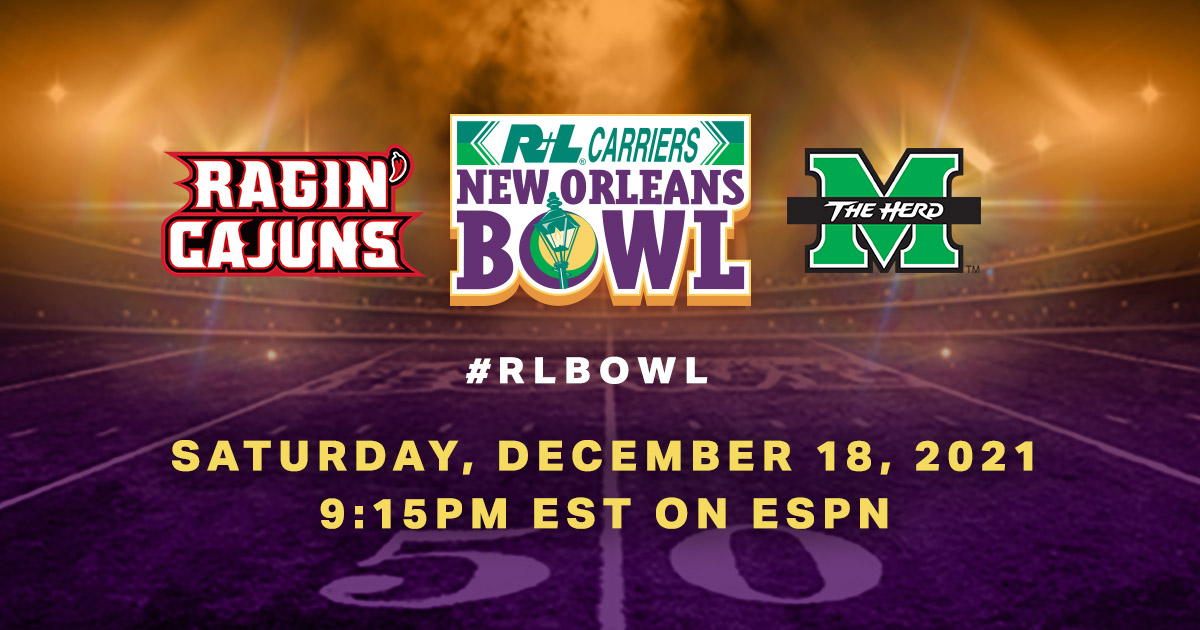 It’s time to dust off the pigskin, we’re heading back to NOLA! The 2021 R+L Carriers New Orleans Bowl matchup has been set and the competitors are raring to go. Representing the Sun Belt Conference, the University of Louisiana Lafayette is pitted up against Marshall University out of Conference USA. This marks the 21st edition of the bowl game and the first iteration played in the newly christened Caesars Superdome, formerly the Mercedes-Benz Superdome.

The Ragin’ Cajuns head the R+L Carriers New Orleans Bowl for their sixth appearance, only dropping one game out of their past 5 attendings. This year, their pregame showing has been strong, arriving with an 12-1 overall record and an undefeated record in Sun Belt Conference play. Billy Napier served as the previous head coach for Louisiana, before accepting an offer from the University of Florida this year. Now, Head Coach Michael Desormeaux will lead the Ragin’ Cajuns for the upcoming competition.

This marks the first appearance of the Thundering Herd at the R+L Carriers New Orleans Bowl. Ranked second in Conference USA – East, Marshall University ended the 2021 regular season with a 7-5 overall record with a 5-3 record in Conference USA play. Head Coach Charles Huff will lead the Thundering Heard in this year’s Battle in the Bayou, hoping to dethrone the previous four-time champions.

Join us here in the R+L Carriers Fan Zone when we congratulate the victor of this year’s bowl game. You can watch the game December 18 at 9:15 p.m. EST on ESPN or listen in on ESPN Radio. Want to join in on the fun? Follow the official R+L Carriers Facebook and Twitter on game day and talk to us with hashtags #rlcarriers, #RLBowl and #neworleansbowl. Also, click here to read the official press release announcement.