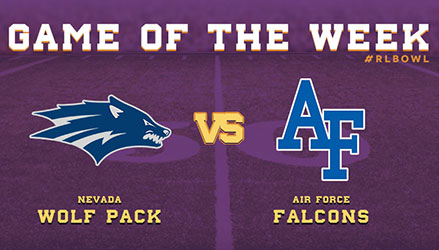 Be sure to vote in this week’s fan poll!

Last year the Air Force Falcons football team experienced their worst season in 35 years. This season they are flying high and in top 4 of the Mountain West. Coach Calhoun has redeemed himself and his team by posting a winning record with 3 games remaining.

During Coach Calhoun’s tenure Air Force has played in 6 bowls over that 7 year period. With 4 Armed Forces Bowl games, 1 Independence Bowl and 1 Military Bowl, they have a combined 2-4 record. The Falcons are eager to add another win in the postseason this year and further erase the 2-10 mark from last year.

Since the mid 80’s, when Air Force posted their best season finishing the season at #5, they have been one of the most aggressive rushing teams in the NCAA. Currently the Falcons find themselves ranked 9th overall with an average of 282 yards per game. They hold a solid 29th ranking for points scored against with an average of 22 per game. Air Force seems to have the tools to score and defend.

Nevada is sitting at 6-3. While Nevada lost in a high scoring matchup against Boise, Air Force captured a win against the Boise team. Nevada is averaging only 191 yards rushing and less than 30 points per game on offense. Air Force is scoring on average just 2 more points per game. Nevada has depended on QB Fajardo and his nearly 60% completions for over 1900 yards. Rushing touchdowns account for a little more than half of end zone points for Nevada. Air Force  splits their touchdowns equally between the rush and the pass.

Nevada’s 6-3 (overall) and 3-2 (conference) is enough for them to lead the West Division of the MWC. In overall MWC standings Nevada falls 5th. Colorado State 9-1 (overall) 5-1 (conference) leads the MWC, Boise State, Utah State and Air Force, all with 7 wins and only 1 or 2 losses in conference play rank 2,3 and 4 respectively in the Mountain Division.  With 6 Bowl tie ins for the Mountain West the Air Force is sitting in good position for postseason play along with Nevada and the leaders from the Mountain Division.

Don’t forget to vote in this week’s fan poll atop this post.