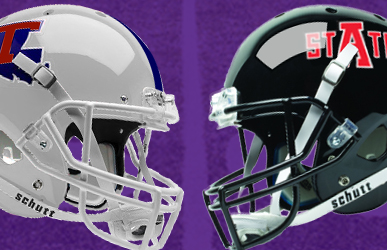 Finishing 8-4 overall and 6-2 in the conference, Louisiana Tech finished 2nd in the West Division of Conference USA. Last year, the Bulldogs finished 9-5 overall and played in the Zaxby’s Heart of Dallas Bowl where they defeated Illinois 35-8. This year, the team is led by graduate transfer Jeff Driskel. You may remember him from his days under center of the University of Florida, but now he is making a name for himself for the Bulldogs. He’s passed for 3,575 yards this year to go along with 24 touchdowns to only 8 interceptions. Compared to his numbers of Florida, this is a huge improvement. Head coach Skip Holtz also has a dynamic running back on his roster in Kenneth Dixon. He has 17 touchdowns on the season. This will be the Bulldogs first appearance in the New Orleans Bowl.

The Arkansas State Red Wolves have been unstoppable in Sun Belt Conference play, earning an 8-0 record and the outright conference championship. Fredi Knighten leads the Red Wolves on offense. The senior quarterback has passed for 1,698 yards and 19 touchdowns this season, however, behind him is a trio of running backs with 24 touchdowns combined this season. The trio is led by senior Michael Gordon, but sophomore Johnston White has 13 touchdowns on the season, good for second in the conference. Freshman Logan Moragne also contributes out of the backfield too, averaging 10.2 yards per rush on the season. Coach Blake Anderson is 0-1 in college bowl games. Last year the Red Wolves lost to Toledo 63-44 in the GoDaddy Bowl.

Don’t be surprised if you see a showdown in the dome. Stopping the running game on defense will be a determining factor in this years New Orleans Bowl. Quarterback play will also be a determining factor. Join us as we follow both teams as they prepare for this exciting match-up. For all the game day details, events and news from New Orleans follow us on Twitter and watch the #RLBowl hashtag. We will be giving away official #RLBowl merch via Twitter and Instagram during the game. Be sure to take our Fan Poll below and let us know who will win the 2015 New Orleans Bowl.

The R+L Carriers New Orleans Bowl will be played in the Mercedes Benz Superdome, home of the New Orleans Saints. Kickoff is at 9:00 pm EST on ESPN.