Last year the Arkansas State Red Wolves shared the Sun Belt title with Louisiana Lafayette. Their two losses are to the SEC’s Tennessee and University of Miami (FL).  They have their entire 8 game conference schedule remaining. They start conference play this weekend when Louisiana Monroe comes to town. Dating back to 1959 Arkansas State has a lifetime record of 21 wins and 14 losses against Louisiana Monroe.  Arkansas has a 4 game winning streak currently against the Warhawks.

Vote for your favorite team in our Game of the Week Poll!

The boys from Monroe are off to a 3-1 start this season.  With a big win over Wake Forest and conference wins over Troy and Idaho, Monroe is looking strong. They stood tall against powerhouse LSU. They still have the SEC’s UK and Texas A&M remaining for non conference play in week 6 and 8. Monroe currently holds the first place spot in the Sun Belt and they are enjoying the ride thus far.  Their only bowl game came in 2012 when they played in the Independence Bowl against Ohio. Monroe surely has their sites set on post season play this season.

Arkansas State has started the season with 4 consecutive non-conference games. This stand against Monroe starts their conference play schedule.  They are playing under first year head coach Blake Anderson. From 2011 to 2013 the Red Wolves racked up three conference championships, 3 bowl games and two 10 win seasons. This all happened with three different head coaches.  The most recent being Bryan Harsin who is back at his Alma Mater Boise State.  He led the Red Wolves to their win in the GoDaddy Bowl in 2013. Imagine a Boise State v Arkansas State R+L Bowl, that could be a fun game to watch in light of the recent coaching changes. 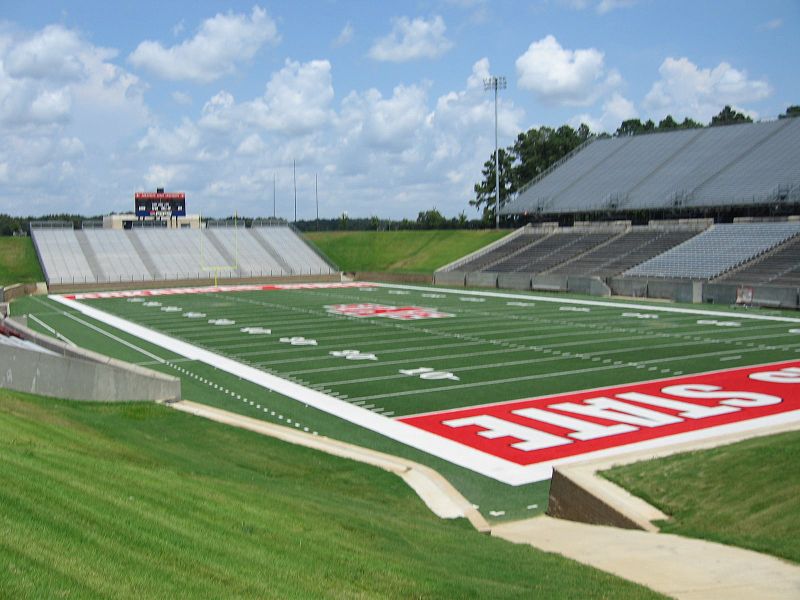 For Arkansas State the one to watch is the Sophomore running back Johnston White. He is averaging nearly 5 yards per carry and has 3 touchdowns to his credit. In 4 games he has carried 48 times for 237 yards.  For the Warhawks keep your eye on Senior QB Pete Thomas. At a towering 6’5″ he can see everything and pass to everyone. In four outings he has passed for nearly 1000 yards with only two interceptions.  While he is only completing 57% of passes, he is putting the ball in the air almost 40 times per game. He will need help in the backfield as he has been sacked 9 times already this season.

Arkansas State averages 24 points per game and averages 24 points allowed per game. The Monroe Defense is allowing an average of 23 points per while their offensive average is less than 20 points. The numbers suggest a great game and tight matchup. The winner of the Sun Belt championship may be playing in this game.