University of Louisiana at Lafayette Stays Atop the Sun Belt 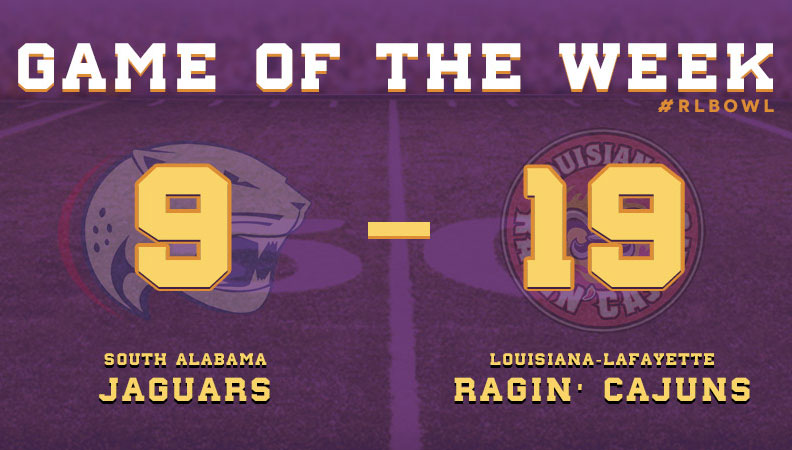 The University of Louisiana at Lafayette remain undefeated in the Sun Belt. With a big win over the University of South Alabama Jaguars Saturday the Ragin Cajuns solidify their spot atop the polls.

The Ragin Cajuns were able to stop South Alabama’s rushing game and hold them to only one touchdown, a pass by Brandon Bridge. The University of Louisiana-Lafayette boys kept the Jaguars to only 4 third down conversions and didn’t allow any 4th down moves to 1st down.  With the exception of the one touchdown, the Jaguars only found themselves in the Red Zone 2 other times. The Ragin Cajuns defense held strong to help the struggling offense. The Louisiana-Lafayette O only grabbed one TD and that was an 8 yard by Elijah McGuire in the 4th quarter.

This was their lowest scoring win of the season. With an average score of 29 points per game they were 10 points below par in this one. The only other games this season with lower scores for the Ragin Cajuns were in their two losses to Ole Miss and Boise State.  South Alabama suffered the same fate. The Jags are averaging 22.4 points per game and have slipped below 10 points in each of their three losses this season.  This loss moves the South Alabama team back to 5th in Sun Belt standings.

After this win college football blogs have begun to predict and 4th R+L Carriers New Orleans Bowl appearance for the Ragin Cajuns. With four games remaining they will face the struggling New Mexico State, UL-Monroe, Appalachian State (who lost to South Alabama in week 5) and Troy to close the season. We aren’t ready to make predictions but Louisiana-Lafayette, Arkansas State and Texas State are all in the hunt for a bowl appearance. Traditionally the Sun Belt has two invites, the #RLBowl and the GoDaddy Bowl. With 5 wins each, these three teams are poised for the 7 wins needed for eligibility.

We are less than 7 weeks from the New Orleans Bowl kickoff. Saturday December 20 is the official start of college football bowl season and the R+L Carries New Orleans Bowl starts the day at 10:00 a.m CSD. Follow along for updates and announcements by following us on Twitter or on Facebook.