The San Diego State Aztecs are no strangers to the R+L Carriers Football family. San Diego accepted the invite in 2011 and faced off the Ragin Cajuns from UL-Lafayette. In a close game the Aztecs fell to the Cajuns. Louisiana-Lafayette went on to defend their title in 2012 and 2013. With the Mountain West as the official conference tie in this year San Diego State is the obvious choice for this week’s game of the week.

San Diego is coming off a pretty good season where they went 8-5 on the season. The Azteks had a strong 6-2 conference record only falling to Fresno and UNLV in conference play. Their success landed them in the Idaho Potato Bowl where they defeated Buffalo in strong fashion 49-24.  San Diego opened their 2014 season at home against Northern Arizona, a top 25 team. San Diego was able to handle the Lumberjacks with a commanding 38-7 win. This week they are facing another top 25 team when they travel to Chapel Hill to tackle the Tar Heels.

Sand Diego’s QB, Quinn Kaehler, had a great opener. While he passed 18 for 29, he logged over 200 passing yards including one short TD pass late in the second quarter. The pressure was off with Donnel Pumphrey running the ball. 19 carries for over 110 yards resulted in two more TD’s for the Aztecs. Both of Donnel’s touchdowns where 1 yard punches at the line. 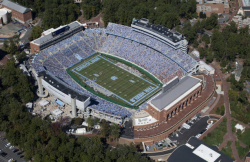 The Tar Heels started 2014 as a top 25 time like San Diego State. Their week one game was against #23 Liberty. At home in Chapel Hill in front of 50,000+ fans the won by 27 points, racking up 56. UNC represented the ACC last year in the Belk Bowl where they defeated Cincinnati (another New Orleans Bowl almuni).  North Carolina is deep on offense. Both QB’s picked up touchdowns last week against Liberty. Marquise Williams passed for 169 yards and Mitch Trubisky went 10 for 16 on 66 more yards. With 2 and 1 interceptions respectively they had a decent first week out. North Carolina had multiple touchdown runs from inside the 10 and 20. Add an offensive pick 6 to go along with three passing TD’s and the score quickly got out of hand for Liberty to rally back.

With two top 25 teams playing one other, and each coming off of top 25 victories, there is a lot at stake. San Diego and UNC had big scoring games, almost 95 points between the two last week, the defense will make or break this game. The stage is set for an offensive battle and we will be watching close. The game be watched on ESPN News at 8:00 eastern Friday night.

We’ve got our eye on New Mexico State and Georgia State as well. After a 2-10 record as an independent in 2013, they are rushing forward as a Sun Belt member and captured a victory in week one. They face a team who didn’t capture a single win last year. Georgia State is playing it’s second season in the Sun Belt and are eager to show some growth in 2014.

2014 marks the 14th playing of the New Orleans Bowl. R+L Carriers is excited to welcome the Mountain West Conference as the opposing tie-in for this years bowl. The Sun Belt will return for a 14th appearance in the R+L Carriers New Orleans Bowl in the Mercedes Benz Superdome on December 20. Stay connected with news from the Mountain West and Sun Belt by following us on Twitter under the #RLBowl hashtag or join the conversation on Facebook.