The San Diego Aztecs fell to the University of North Carolina Tar Heels this weekend. SDSU traveled cross country ready to play football. When the clock ticked to 0:00 San Diego had the most everything, except points. 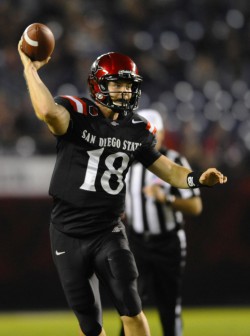 The Azteks had the most yards. They out passed UNC by almost 80 yards. SDSU’s  surpassed UNC by 57 yards on the ground. San Deigo had the most total yards compiling over 500 total yards and controlled the ball for most of the game. SDSU held the ball more than 15 minutes more than North Carolina. They converted on 3rd downs the most as well. They also surpassed the home team on yards given on penalties.

San Diego moved into the lead midway through the second quarter. They kept that lead until the midpoint of the 4th quarter.  North Carolina commanded the field and marched 80 yards in less than 2:30 in 8 well executed plays to take the lead. Four minutes later UNC put up 3 more with a 23 yard field goal.

Not ready to give up the field San Diego down only by four began to fight back. Quinn Kaehler moved the ball from their 25 yard line 72 yards with an air assault completing two passes each to Lloyd Mills and Larry Clark. Those four completions picked up nearly 50 yards. Pumphrey picked up a 20 yard dash between Mills and Clarks catches and put San Diego in place to score and win. With the clock showing 00:14 Kaehler passed for his only INT when UNC’s Tim Scott grabbed the pass in the end zone. Game over.

San Diego surpassed UNC in every stat including those three turnovers except for final points. The one interception of the game is the one that kept them from earning the W.  Pumphrey had a stand out game. With 17 carries he ran for 100 yards and found the end zone 2 times.  Kaehler completed 23 passes on 39 attempts on the way to 341 yards including 3 touchdown passes.

Next week San Diego gets the week off to adjust before they head up the coast to tackle Oregon State. Here at #RLBowl HQ we have our eyes on Air Force and Georgia State. Check back on Thursday for our 3rd Game of the Week featuring a Mountain West and Sun Belt matchup. As always you can follow the road to the R+L Carriers New Orleans Bowl on Twitter by following the official #RLBowl hashtag or by joining the conversation on Facebook.