Game of the Week | Jaguars take on Lafayette

The 3 time defending R+L Carriers New Orleans Bowl champs take on the South Alabama Jaguars to hold their spot in the Sun Belt.

The Cajuns have an appetite for bowl games after 3 consecutive appearances in the New Orleans Bowl.  After a rocky start ULL has been steady in picking up wins across the conference.  The boys from Lafayette are ranked second in the Sun Belt with the Jaguars from South Alabama at 3rd. Georgia Southern tops the ranking but are ineligible for bowl play. This game has bowl implications for both teams.  The young Jaguars went 6-6 in their first year of bowl eligibility last year and are looking for their first ever bowl game this year. Both the New Orleans Bowl and the Go-Daddy Bowl would be big post season prizes should the Jaguars remain near the top  of the Sun Belt.

The Cajuns remain undefeated in conference play. Ole Miss is one of their 3 non conference losses. While QB Terrance Broadway has been an effective passer, 1219 yards on 117 throws and 7 touchdowns, the running game from Lafayette can’t be ignored. Ranked 26th overall in rushing yards they are running the ball on average 225 yards per game. Both McGuire and Harris have 17 touchdowns combined. Those 17 are almost double the 9 passing TD’s that ULL has recorded.

The South Alabama Jaguars are one win away from matching their record from last season. They have Sun Belt power team Arkansas State following this match against ULL. Then Texas State and two non conference games to close their season. They need two wins out of the next three Sun Belt games for a chance at a bowl invite. While Brandon Bridge, the Senior QB, has had a good season he has thrown half as many interceptions as touchdowns. Like ULL’s Broadway, he has a little more than 1200 passing yards. The difference is the two top rushers for the Jags only have 4 touchdowns between them and 2/3 rds the yards of the ULL rushers. 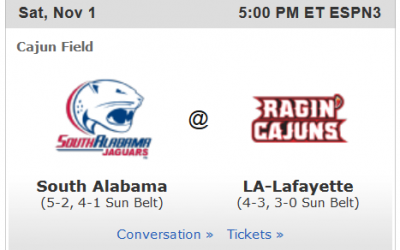 The Jaguars are only averaging 24 points per game and have allowed an average of 21. Their losses have been big and most wins were by two scores or more. Lafayette is actually upside down in this area with more points allowed than points scored. They are averaging 30 points per game and allowing an average of 32. Three big losses of 25 points or more will do that to a team’s stats. Look for both teams to pass the ball.  Jaguars have been effective in stopping the run and have had success passing like ULL. This game will be close and will set the tone for the final weeks of conference play.

We may be watching the Sun Belt representative to the R+L Bowl here. The Jaguars take on Lafayette, game time is 5:00 p.m. central time in Lafayette. ESPN 3 will have the action streaming. Stay tuned to our Twitter feed for game updates at @RLCarriers and under the hashtag #RLBowl. For the latest in R+L Carriers New Orleans Bowl news like us on Facebook and don’t forget to take a minute to vote in our fan poll above.