It is time for some football and Louisiana Monroe plays in our first Game of the Week. We are less than 4 months from the 2014 R+L Carriers New Orleans Bowl. The Sun Belt will return for the 14th playing of this game. December 20 is the the target for many Sun Belt teams this year. Playing in the Mercedes Benz Superdome is always a thrill for players. We are excited to welcome the Mountain West as the other R+L Bowl conference tie in this year. For more about the MWC joining us start here and see this post for a guide to all Mountain West, Sun Belt and Conference USA bowl game tie ins.

Louisiana-Monroe takes on Wake Forest Thursday night. Monroe is always a favorite in the Sun Belt. The Warhawks from the northern reaches of Louisiana have made waves in the last 7 or 8 years. It started with an upset of Alabama in 2007. A 25 point underdog, Monroe fought and scratched defeated the SEC giant. In 2012 the Warhawks struck again and shocked the SEC when they took down #8 Arkansas in overtime. UL-M rode the wave all season to the Independence Bowl in nearby Shreveport where they played Ohio U. 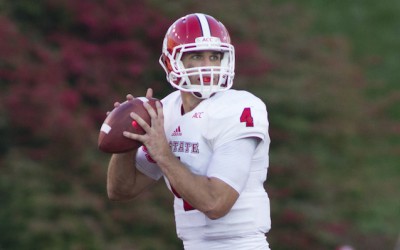 Monroe is led by Todd Berry coaching his 5th season at Monroe. Since his arrival at the end of the 2009 season Monroe has gone 23-26. It was the 2012 season where they tied UL-Lafayette for second in Sun Belt conference standings. Last season they stole a win from R+L Bowl champs Lousiana-Lafayette and defeated Wake Forest.  Monroe will start transfer Pete Thomas, who has played at Colorado State and more recently at North Carolina State. Thomas gives the experienced Warhawks a veteran behind center calling the shots.  It should be noted that Thomas threw for only one touchdown and two interceptions against Wake Forest last year at NC State. Thomas’ NC State fell 28-13 in that match.

Coach Berry has been quoted ”This is the most mature team we’ve had, and I think maturity brings physical maturation and confidence.” The Sun Belt’s UL-Monroe is no underdog in this matchup. Wake Forest is rebuilding with a young team. The national tv audience is also motivation for the Warhawks.

Wake Forest would like to avenge last years lost but the team is young. Monroe is facing a young Wake Forest team. New coach and a true freshman QB will lead the Demons Thursday night. Wake Forest looks to even the score after last seasons upset against Monroe. Wake Forest is at a deficit when over half of their rushing and receiving yards graduated from the program. They face a deeper experienced Monroe who have 8 of their starting defensive line back on the field.

Both teams are under pressure to perform on the national stage tonight. The Warhawks are out to improve last years 6-6 season and return to the Bowl Season they experienced in 2012. Wake Forest is ready to put all the spring and pre-season work out on the field. We are excited to watch tonight’s game!

Be sure to take time and vote for your favorite team to win this game. Follow the R+L Carriers New Orleans Bowl hashtag for the latest news, events, and contests at #RLBowl.