New Mexico’s Lamar Jordan was held to under 100 yards passing and hit his target only 8 times in 18 attempts.  San Diego was able to score from the field goal, from the rush and from the pass. The final score, 24-14 is a lot closer than the game statistics would suggest. 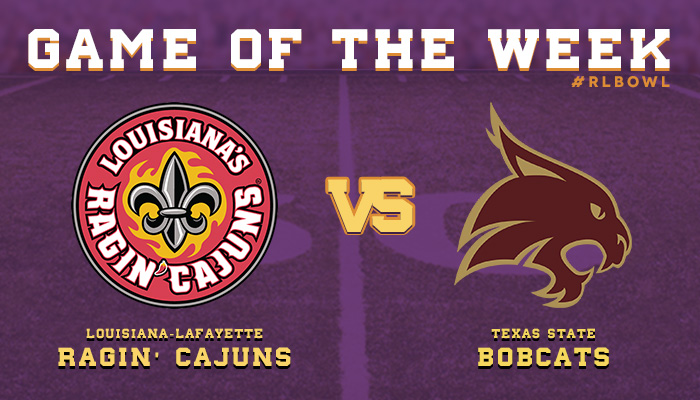 Week 8 Game of the Week

This week the Sun Belt is holding a Tuesday night game. 3 time defending champion UL-Lafayette travels to Texas State for this early week showdown. Last year we told you about the Texas State Bobcats and their desire to play in New Orleans.  Lafayette is currently holding 4 place in the Sun Belt right behind Texas State. Both have 1-0 conference records but the Cajuns have taken 3 losses to Texas State’s 2. Arkansas State and Georgia Southern are atop of the leaderboard in 2nd and 1st places respectively.

Vote for your Favorite

Our fan poll is open for this game. Vote here!

QB Terrance Broadway went 20 for 26 and completed two times for touchdowns this past weekend against Georgia State at home. With over 200 yards total Terrance was in command of his offense the entire game.   The same attention should be paid to Texas State QB Tyler Jones. The Sophomore  has already surpassed his numbers from last year at Texas State. He is completing better than 68% of his throws and has logged 12 TDs and only 9 sacks. With over 1100 yards to his credit it is no surprise that Texas State is sitting near the top of the Sun Belt.

The Bobcats and Lafayette plays Tuesday night this week. The nationally broadcast game will be shown on ESPN2. 8:00 p.m. Eastern time is kick off from Bobcat Stadium.  To follow all the R+L Carriers New Orleans Bowl action follow us on Twitter and find the hashtag #RLBowl. Like us on Facebook and join the conversation there as well.