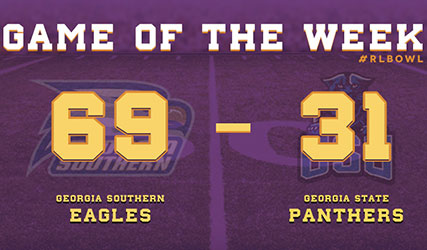 Not since their 83-9 whipping of Savannah State have the Eagles racked up as many points as they did Saturday. They outscored Georgia State 42 to 14 in the second half. Georgia Southern stuck to the running game and racked up over 600 yards rushing. Kevin Ellison only passed the ball 6 times and completed on 5 of those throws.

While Southern only passed for 47 yards, Georgia State only rushed for 47. They aired it out 38 times, completing 24 of those for over 400 yards and 4 touchdowns passing. State just couldn’t get the third down conversions making only 4 of 9.  QB Nick Arbuckle throwing for the Panthers had a great game that would have been enough against South Alabama, but not enough to top the Eagles.

From Around the Bowl

Here are a few other teams we are watching close from the Sun Belt and Mountain West.