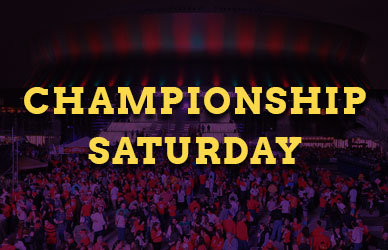 Saturday will be a big day for College Football. Several championship games will directly impact who will be participating in the College Football Playoff and the R+L Carriers New Orleans Bowl.

It’s quite simple. It would be hard for the College football Playoff Committee to shake the rankings up should each team win their respective games. Alabama is expected to be in the playoff win or lose. They have been #1 all year and their play and schedule have been impressive. Things could get interesting though if Clemson and or Washington lose. With a loss by one of those teams, it could open the door for Michigan, who was ranked #3 last weekend before losing to #2 Ohio State and has now  dropped to #5 or the winner of the Big 10 Championship between #6 Wisconsin and #7 Penn State.

Western Kentucky will face Louisiana Tech in a game that will directly impact the R+L Carriers New Orleans Bowl.  In their match up earlier this season, Louisiana Tech won 55-52 in a high scoring battle. Western Kentucky is looking to repeat as Conference USA Champions after their conference championship last season. Louisiana Tech may be on the road the NOLA for the R+L Carriers New Orleans Bowl for the second consecutive year. Last year they beat Arkansas State in the bowl game.

Preseason conference favorite Appalachian State has already won at least a share of the conference title. Arkansas State, 2015 R+L Carriers New Orleans Bowl runner-up and Troy are looking to share that title with them. Arkansas State can claim a share of the title by defeating Texas State, while Troy can do the same by defeating Georgia Southern. Looking to make it to 6 wins on the season and become bowl eligible are Louisiana and South Alabama.

College Football Selection Day is Sunday, December 4. This is when the final rankings will be announced and we will know who will be participating in bowl games. Stay tuned to the R+L Carriers New Orleans Bowl Fan Zone for RL Bowl team announcements and college football updates.