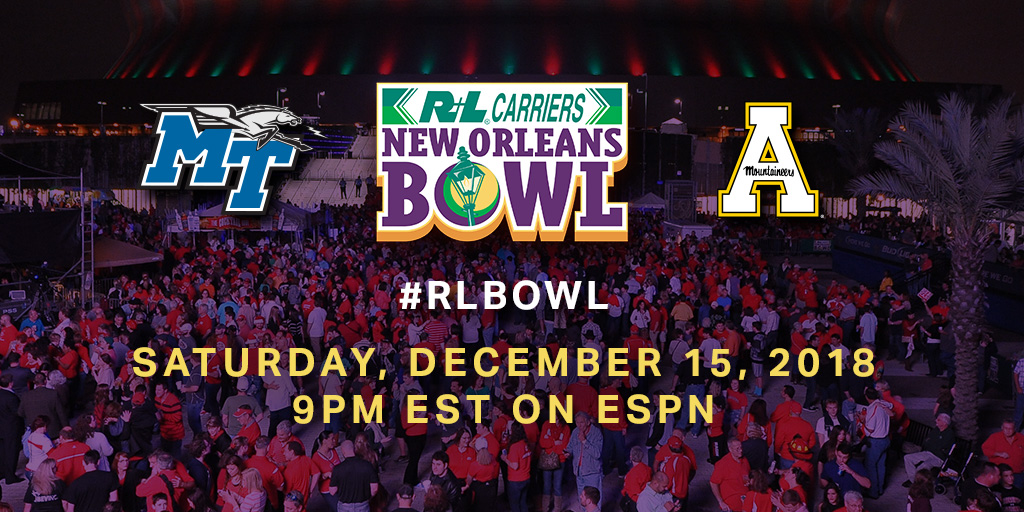 The 2018 R+L Carriers New Orleans Bowl match-up has been set!

Representing the Sun Belt, Appalachian State will face Middle Tennessee out of Conference USA in the 18th edition of the bowl game. This is the 13th year that R+L Carriers will be the official sponsor.

Here’s what you should know about both teams.

For the third straight year, the Mountaineers have been crowned the Sun Belt Champion. App State, who was ranked in the top 25 for the first time in school history back in October, beat Louisiana in the inaugural Sun Belt Championship Game. In week 1, the Mountaineers nearly pulled off an upset but lost to Penn State 38 – 45. This showed how dynamic the team can be on the field, however, the dynamics of the team shifted after star running back Jalin Moore injured his ankle and was announced out for the year.  The App State defense is the team’s biggest strength and will need to be on display in New Orleans to stop the Middle Tennessee offensive attack.

The Blue Raiders from Murfreesboro came up short in the Conference USA Championship Game as they were defeated by UAB 27-25, but their 8-5 overall record was enough to get invited to New Orleans. An interesting storyline for the team is Head Coach Rick Stockstill and his son, QB Brent Stockstill. Brent has been the QB the last four years under his dad and this will be their final game together.  In the Conference USA Championship, Brent had his 18th career 300-yard passing game. Look for the passing attack to be on display in New Orleans!

Join us here in the R+L Carriers Fan Zone to follow Middle Tennessee and App State on and off the field leading up to the bowl game on December 15 at 9 PM EST. You can watch the game on ESPN or listen to the game on ESPN Radio. For all the game details, events and news from New Orleans follow us on Twitter, Facebook, and Instagram and join the conversation using the hashtag #RLBowl!