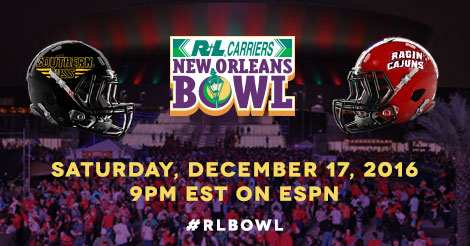 The 2016 R+L Carriers New Orleans Bowl match-up has been set! Representing Conference USA, the Southern Miss Golden Eagles will face Louisiana-Lafayette out of the Sun Belt Conference in the 16th edition of the bowl game. This will be the 11th year that R+L Carriers will be the official sponsor.

Finishing 3rd in the Conference USA West Division, Southern Miss finished the season 6-6 overall and 4-4 in conference play. Last year, the Golden Eagles finished 9-5 overall and 7-1 in conference, earning a spot in the Zacby’s Heart of Dallas Bowl. They lost to the Washing Huskies 44-31. Southern Miss is coming into this bowl game ranked No. 25 in the FBS in yards per game at 472.1 during the regular season. The team is led by a number of Preseason All-Conference USA selections, including quarterback Nick Mullens who also was the preseason Conference USA Offensive Player of the Year and is currently on the Walter Camp Player of the Year watch list.

The Ragin Cajuns are back in the R+L Carriers New Orleans Bowl after not making an appearance last year. The Cajuns made an appearance in this bowl game from 2010-2014, winning four straight championships.  In their last appearance in 2014, they defeated the Nevada Wolf Pack 16-3. Needing a win in the last game of the season, the Ragin Cajuns defeated Louisiana Monroe 30-3 to become bowl eligible. The team is led by Senior running back Elijah McGuire, who in 12 games this season has rushed for 1,069 yards. Behind center will be Senior Quarterback Anthony Jennings who has passed for 2,083 yards and 11 touchdowns this season.

The storyline going into this game will be if Southern Miss can stop the Ragin Cajuns from capturing their 5th R+L Carriers New Orleans Bowl Championship in 6 years. Southern Miss will be looking to keep the championship in the Conference USA after Louisiana Tech defeated Arkansas State last year. Join us in the R+L Carriers Fan Zone as we follow both teams as they prepare to take the field on December 17 at  9 pm EST.  For all the game day details, events and news from New Orleans follow us on Twitter and Facebook and watch the #RLBowl hashtag.